In the days before and after my recent trip to Singapore, a good deal of my downtime was spent poring over Joe Studwell‘s Asian Godfathers, a book that dutifully takes up the onerous task of explaining the rise of Southeast Asia (looking strictly at Indonesia, Singapore, Malaysia, Thailand and the Philippines) and Hong Kong’s ethnic Chinese tycoons and how the dysfunctional system they are a part of has stymied the region’s ability to produce globally competitive companies.

Returning to Singapore rekindled a nostalgia I occasionally get for the Mandarin-speaking world (Chinese Malaysians in Kuala Lumpur, where I currently live, tend to prefer speaking Cantonese). The city-state offered me ample opportunity to move around as many locals do, divided into cliques that have chosen either English or Mandarin as the preferred lingua franca.

With an ethnic Chinese population of 77 percent, Singapore (followed by Malaysia at 29 percent) has the largest Mandarin-speaking population in Southeast Asia.

According to Studwell, “most of Asia’s godfathers are ethnic Chinese,” godfather being the term Studwell has chosen to characterize a group that “reflects traditions of paternalism, male power, aloofness and mystique.”

Contrary to the opinions of racial theorists, however, Studwell argues that a history of migration and colonialism have been the main factors which positioned a majority ethnic Chinese population in the ranks of the region’s 1 percent. Studwell writes:

Most Southeast Asian migration took place in a colonial era when different groups were channeled by colonial governments — with their ‘superior’ organizational capacity — towards different activities… When the Chinese arrived in Southeast Asia, they were frequently barred from government service and from many professions, and often not permitted to own agricultural land or engage in farming; opportunities in trade and commerce, however, were largely untrammeled.

The business acumen gained in this manner, Studwell says, is the example of an externality created by policy echoed elsewhere in history.

It is omitted that in pre-nineteenth-century Europe Jews were excluded from guilds, from many areas of trade and from farming, while the Christian church proscribed its followers from lending money at interest (not unlike contemporary Islam). Most economic opportunities for Jews were circumscribed while those in banking were unnaturally ripe.

On top of this, theories supporting Chinese exceptionalism in the region lose steam because they fail to realize that most are no longer culturally moored to the mainland. To prosper, godfathers have had to become cultural chameleons, a process that has forfeited their “Chinese-ness.”

About half of my Chinese friends and colleagues in Kuala Lumpur have lost the ability to read Chinese characters. In Singapore, my sampling of acquaintances often avoid typing to me in Chinese because they cannot type quickly — or at all (yet you’d be hard-pressed to find one to admit this downfall).

Lee Kuan Yew himself, Studwell notes, is ashamed of the fact that his Mandarin is not as strong as his English.

But in Singapore, the place perhaps most wistful of its heritage, Chinese community activities abound in a political environment familiar to the neo-confucianism rhetoric expounding harmony found in China.

Nothing can make me more nostalgic of my China days than spending the afternoon listening to a talent show put on by the Singapore Federation of Chinese Clan (sic) Association. Nope, nothing. Especially if it includes belly dancing! 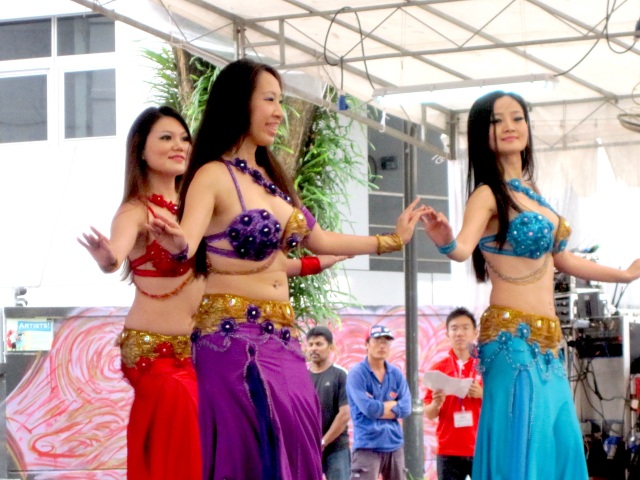